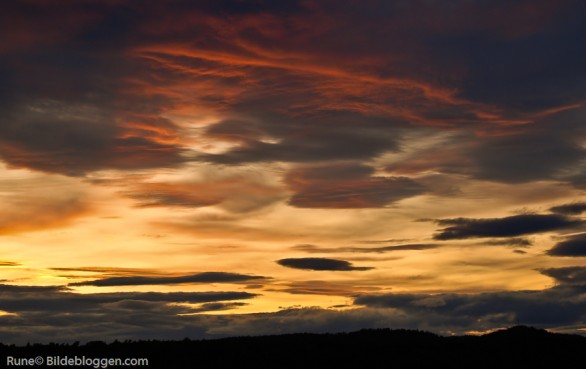 Have a nice weekend and a great SkyWatch 🙂

Why is the sky colorized?

On its way through the atmosphere some light rays are broken or shattered by molecules in the air, which brings colors to a blue sky and spectacular colors to the sunsets. It is the sun in combination with water and ice crystals in the clouds that generates these phenomenon’s with colorized clouds in various combinations and intensity.

During a sunset or sunrise the sun has up to 30 times the light distance from earth in comparison to mid day, and on its way the sunrays encounters everything from human made pollution, volcano eruptions, ash from fires with smoke and pollution from outer space. The light that we percept as white are a mixture of different colors like red, orange, yellow, green, blue, indigo and purple. All the colors in the visual spectrum has its own wavelength where red and orange has the longest wavelengths and purple and indigo has the shortest. At sunset the sunrays meets way more molecules due to the longer distance, and disperses even more purple, yellow and green light. Because of this it’s only red and orange that are visible from the ground, and the same happens at sunrise. Its only when the sun is over the horizon that we can see the light as white.

Have not you picture when you comment? Sign up for http://en.gravatar.com/site/signup and add a desired image to appear when you comment, applies here and on other blogs.